"Thank you, God, for making me an athiest." - Ricky Gervais 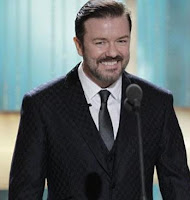 I really enjoy Ricky Gervais.  There.  I said it.  I think he is very funny, at times (I know that not everyone agrees).  At other times, he is WAY OVER THE TOP (I think that many would agree).  And even those moments intrigue me, and, yes, often make me laugh.  Therefore, I was sorry to have missed last Sunday night's Golden Globes.  I had actually been looking forward to the show.
Even though I missed the show, I have not missed the fall out.  I understand that Ricky was typical Ricky.  He was cutting, funny, unreserved and irreverent.  I have found it interesting that even the people who were responsible for the production of the Golden Globes have felt the need to speak out about some of the things Gervais said (Come on folks.  You hired the guy and knew what you were getting into when you signed the contract. But I digress.).  Gervais wasn't going to change his ways, for better or for worse.
Amidst all of the hullabaloo about his hosting, the comment that has gotten quite a bit of the buzz is how he signed off for the night.  In case you missed it too, Gervais said, "Thank you, God, for making me an atheist."  He has been panned, prodded, and vilified for this comment.  He has appeared on talk shows and has been asked to defend the way in which he closed the show and define the reasons why he decided to do it in such a way.  One interviewer even asked, "Did you not know you were offending people by saying that?"

I am not sure I understand what all the fuss is really all about.  Is someone claiming to be an atheist and making a joke about it a reason to get upset?  What is it about this simple statement that frightens people?  What is it that has been exposed in ourselves in what Mr. Gervais said?

In my opinion, his statement has opened up a door for discussions about faith and belief in God.  There is no reason to be intimidated or frightened by someone's words about their own belief set or lack there of.  If we really believe God to be who we say God is, then why would Gervais' words bother us?  Let us use this opportunity to enter into intelligent, honest and open conversations with others about beliefs, doubts and uncertainties.  There is no reason to get defensive or be offensive!  Just listen.  Open your heart and your mind; listen and share.  I think you will be surprised at the results.

Look at Paul's approach to the Athenians (Acts 17:17-27).  He did not condemn their ways or beliefs.  Instead, he affirmed their belief system, and then talked about his own.  You do not have to defend or go on the attack.  Simply be willing to enter into the conversation.

Thank you, God, for being Immanuel, God with us.  God with us as we work out what it is that we believe.
culture Second Testament