Showing posts from May, 2013
Show all

In Memoriam - A Memorial Day Tribute

By Brian Shivers - May 27, 2013
In memoriam This post is written to the memory of some of those who have gone before who have had a tremendous impact on the person I am becoming and who have left an indelible mark on the world.  Thank you will never be enough. _____________________________________________________ Ket Baldwin, neighbor, September 11, 1925 - May 6, 2012. It was an honor to grow up in the shadow of his house and often under the cover of his roof.  Everything about this small giant taught me that it truly takes a village to raise a child.  His wry smile never faded and his door was never closed to any child in the neighborhood who wanted to play, to hang out or to have a homemade pop cycle.  Ket and his beloved wife Ruth were an example to me of devotion and love.  His quiet strength and spirit of volunteerism was the anchor that held our tiny village together. Forrest Lyons, Jr., coach, January 25, 1932 - May 13, 2009. Being friends with Forrest's son, Andy, gave me a glimps into his li
Post a Comment
Read more

Trinity Sunday - Bigger Than We Imagine 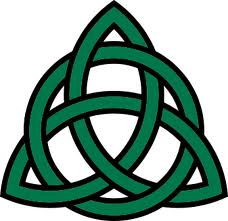 In pulpits throughout the world on this Trinity Sunday, sermons were preached on the Holy Trinity, possibly the greatest of all theological mysteries.  Theologians have debated the importance and the impact of the doctrine of the Trinity for centuries.  And for nearly just as long, pastors and laity have been excommunicated from the church by reason of heresy because of their "misunderstanding" of Trinity. However, if truth be told, none of us have ever understood this doctrine perfectly.  It is and always will remain a tremendous enigma.  It must be this way.  It is important for us to remember that we cannot get a complete handle on the divine.  God will not fit neatly within the boxes we have fashioned in our vain hope to contain the uncontainable. Yet as confusing and confounding as the doctrine of Trinity can be, it is a vital doctrine for the church for within it we come face to face with the ineffable. Trinity reminds us that God is completely Other. In a world wh
Post a Comment
Read more

Their Story Becoming Ours - Youth Share About the Presence of God

On Sunday, May 19, six graduating seniors from Second Presbyterian Church gave witness to where they have experienced the presence of God in their lives.  I invite you to take 30 minutes in your day to sit back, relax, and be moved by these stories (you may want your box of tissue close at hand). As Frederick Buechner wrote in Telling Secrets , “My story is important not because it is mine, God knows, but because if I tell it anything like right, the chances are you will recognize that in many ways it is also yours… it is precisely through these stories in all their particularity, as I have long believed and often said, that God makes himself known to each of us more powerfully and personally. If this is true, it means that to lose track of our stories is to be profoundly impoverished not only humanly but also spiritually.” Their story is our story.
Post a Comment
Read more

By Brian Shivers - May 16, 2013
"When the days drew near for him to be taken up, he set his face to go to Jerusalem. And he sent messengers ahead of him. On their way they entered a village of the Samaritans to make ready for him; but they did not receive him, because his face was set toward Jerusalem. When his disciples James and John saw it, they said, 'Lord, do you want us to command fire to come down from heaven and consume them?' But he turned and rebuked them. Then they went on to another village. As they were going along the road, someone said to him, 'I will follow you wherever you go.' And Jesus said to him, 'Foxes have holes, and birds of the air have nests; but the Son of Man has nowhere to lay his head.' To another he said, 'Follow me.' But he said, 'Lord, first let me go and bury my father.' But Jesus said to him, 'Let the dead bury their own dead; but as for you, go and proclaim the kingdom of God.' Another said, 'I will follow you, Lord; but le
Post a Comment
Read more

By Brian Shivers - May 05, 2013
The following prayer was prayed after the Sanctuary Choir at Second Presbyterian Church sang a stirring arrangement of Kurt Bestor's  Prayer for the Children.  "Can you hear the prayer of the children on bended knee, in the shadow of an unknown room? Empty eyes with no more tears to cry turning heavenward toward the light. Crying Jesus, “Help me to see the morning light of one more day, but if I should die before I wake, I pray my soul to take.” Can you feel the hearts of the children aching for home, for something of their very own. Reaching hands with nothing to hold onto but hope for a better day, a better day. Crying Jesus, “Help me to feel the love again in my own land, but if unknown roads lead away from home, give me loving arms, away from harm.” Can you hear the voice of the children softly pleading for silence in their shattered world? Angry guns preach a gospel full of hate, blood of the innocent on their hands. Crying Jesus, “Help me to feel the
2 comments
Read more

The Power of a Shared Lunch 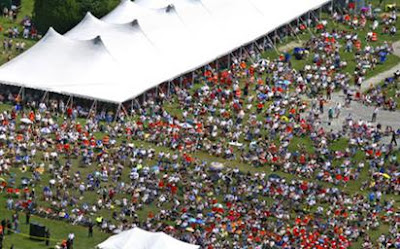 They came.  All morning and all afternoon they gathered.  They most likely hailed from many different places and together represented a diverse slice of society.  Some came because they were curious.  Others arrived because they "needed" to be there.  Still others wandered onto the scene completely by accident.  There were those that stopped in order to get something off of their chest.  They had some protesting to do; their displeasure had to be made known.  Many were probably unsure as to why they had come to this place at this time.  Maybe they got caught up in the excitement of a growing crowd.  Maybe a friend or family member brought them.  Or maybe there was something greater at work.  It really didn't matter why they came.  They were there. As minutes turned into hours, people began to settle into small groups to talk about what they had seen and heard.  Many shared stories of similar gatherings on similar hills across the countryside.  Others spoke
Post a Comment
Read more
More posts