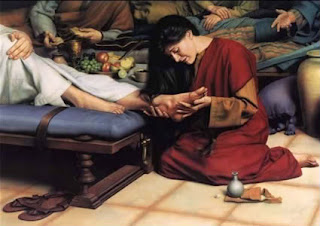 In this text, Luke has painted quite a scene.  Jesus has been invited to come dine at a Pharisee's home (a Pharisee was a Jewish religious leader in the first century).  While he was dining a woman came to Jesus and acted in a rather peculiar fashion.  This was a woman of bad reputation.  Apparently, everyone knew.  We are not told what her sins were.  That isn’t point.  What is important is that this unnamed woman came to Jesus immediately upon learning that he was in her town.  She had the audacity to enter into the house of a Pharisee.  She had the veracity to come to Jesus just as she was.  She came to him, but did not approach him in conversation.  Instead, when she was in the presence of Jesus, she wept.
She wept.  Her tears weren’t any ordinary tears.  No, these tears contained the entirety of her mistake-filled life.  Each salty drop was a new tale of bad choices and soul scars.  Each drop from her downcast eyes traced the lines on her checks that had been left there by her hard life.  And then they fell.  Her tears of lament fell not to the floor, but onto the feet of Jesus.  And Jesus heard the story that each tear carried.
This courageous woman then opened her jar of expensive perfume and poured it on Jesus' feet.  This jar and the perfume it contained were quite possibly her most prized possession.  This perfume represented who she was in this world, and she chose to empty it on the feet of a man who was called teacher, prophet and miracle worker.
She gave Jesus everything she was and all that she possessed.  She bared her soul and her life to him without even saying a word.
Now go back to the passage and read it once more.
Notice that there were two responses to the woman’s actions.  The first was the unspoken response of the host.  Under his breath, he condemns the woman and questions Jesus.  “How could he allow this sinful woman to touch him?  How could he allow a woman with that kind of reputation to even get close to him?  Just think of the rumors.  If he only knew.  What kind of prophet could he possibly be?”
Yet, Jesus knew.  Jesus knew much more than the host of the dinner party could have ever imagined.  Oh, if only the host could have known what was really going on.  Oh, that his heart could have been as open as hers.
The second response is Jesus’.  His focus and his heart-felt, grace-filled response is aimed directly at the beautiful woman kneeling at his feet and collects all of those gathered in its redeeming wake.  Jesus takes this woman of bad reputation and elevates her.  He makes her the example to be followed: her honesty, her sorrow, her brokenness, and her willingness to pour out her life and her soul at the feet of the Master.  Her sins were forgiven because of these things, not just because of her actions.  It was her faith that allowed room for grace and renewal to enter her life.  She had the courage to pour out her life and empty her soul to Jesus, and her sins were forgiven.
Do we have the courage to follow the example of this unnamed woman?  Can we bring our authentic selves to Jesus?  Can we allow the room to hear and receive Jesus' words, “Your sins are forgiven.  Your faith has saved you, go in peace”?
quotes Second Testament