Echo of a Song

By Brian Shivers - October 19, 2011
“Therefore, since we are surrounded by so great a cloud of witnesses, let us also lay aside every weight and the sin that clings so closely, and let us run with perseverance the race that is set before us, looking to Jesus the pioneer and perfecter of our faith.” Hebrews 12:1-2
In 1996, I traveled with several students from Second Presbyterian Church to Santa Fe, NM where we worked on a small community farm sponsored by the local Presbyterian Churches.  This farm, supported by volunteers, gave 100% of its produce to the homeless shelters in the area.  The trip was more than any of us could have expected or imagined.

While in Santa Fe, we stayed at Saint Catherine Indian School, a boarding school founded in 1887 to provide Native American youth with a quality education.  One afternoon on a quick return trip from the work site to the school, I had the opportunity to meet a Native American man who was walking across the campus.  His name was Bob Chavez.  He was the art teacher at the school.
After some small talk, Mr. Chavez invited into a quaint gift shop where the school sold pens, pencils, shirts, postcards, posters and the like to raise extra morning to support the school.  Some of the cards and posters were adorned with pictures of the school or the beauty of the surrounding area.  Other cards were graced with beautiful southwestern art.  I inquired about the artwork which sparked this incredible story.

Bob, a Native American from the Conchiti Pueblo, told me that he served in World War II as a member of the New Mexico National Guard.  He and 1800 of his comrades were taken captive in Japan.  He survived four cruel years as a prisoner of war which included the brutal Bataan Death March that saw thousands of Filipino and American soldiers die.  Bob said that while he was in the prison camps, he made a promise to the Great Spirit that if he survived, he would devote himself to his school, St. Catherine's Indian School, where he was a member of the first graduating class in 1935.
When he returned to New Mexico after the war, Bob made good on his promise.  For over 50 years, he volunteered his time and considerable talent introducing art and track and field to the school.  It was his artwork, produced in his simple art studio on St. Catherine’s campus that adorned the posters and postcards sold in the gift shop. 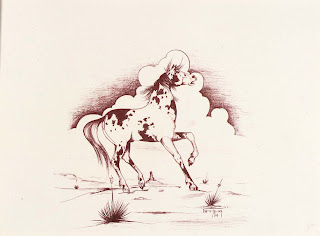 Bob, whose Indian name given by his grandmother is Ow-u-te-wa, means “echo of a song.” Bob passed away in 2002, and his life and work were honored by all who knew him.  Manuel "Bob" Chavez has been and will continue to be the echo of God’s song of faith, grace and love to countless Native American boys and girls and one youth minister from Indianapolis, Indiana.
Your life is also an echo of this song of grace.  May others be blessed by its reverberations as they witness your life and give glory to God.  Allow your life to SING!
Second Testament stories