By Brian Shivers - January 09, 2012
For the last two days we have had spotty internet connections. It is really funny what we take for granted. Over the last week, a reliable internet connection is one of those things upon which I became all too reliant. As a result, this post will be about two days.
On Monday, our travels began with a visit to the Nazareth Academic Institute. This is a one of a kind school located in the town of Nazareth. This school has been open since 2008 and is committed to providing Palestinian Muslims and Christians and Israeli Jews the opportunity to gain a university education together. The mission, vision and commitment of the school and the students are quite unusual in this country. Almost all schools would not welcome nor allow Israelis and Palestinians young people to study together. We had the opportunity to meet with the president, staff, professors and students of the institute. Their story is quite inspiring and hopeful. Dr. George Kanazi, the president, said that their work is hard, the road is not easy, but "we are optimistic." This is an awesome message of hope in the midst of an often volatile and divisive issue and divided land. They are working hard to gain governmental support and funding. If they can do such, it will be much easier to achieve their stated goals. If they do not, the road will be much more difficult, but they remain steadfast in their commitment and dedication. There are currently 80 students studying in the institute. They hope to add more majors and more students each year as they grow in scope and impact. Check them out at www.mecedu.org.
We also visited the unbelievable ruins of Bet She'an, the Mosque of Omar and the Church of the Nativity in Bethlehem. Bet She'an is an incredibly impressive city that has alternately been inhabited by the Canaanites, Egyptians, Greeks, Romans and Byzantine Empire. Ruins of many of these cultures are evident around this site - including an impressive theatre (first photo below) and main street. 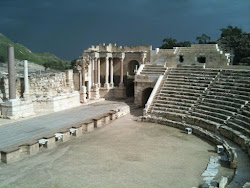 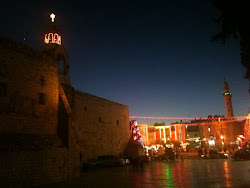 Manger Square in Bethlehem was also amazing (second photo above). It is still decorated with Christmas lights during this wonderful season. The Church of the Nativity sits on one end and the Mosque of Omar is situated on the other. This again is a testimony that not only should we live together in harmony, it is happening! As a matter of fact, when the Muslims first began to pray here centuries ago, they did so in the Church of the Nativity.
Tuesday began with a trip to Hebron. We made a quick stop at Mamri where Abraham was visited by angels who told him that even in her old age Sarah would bear a child, and Sarah laughed. We then toured the Tomb of the Patriarchs. This location is also called the Ibrahimi Mosque. It is overwhelming to be in this beautiful historic mosque and traditional burial sites of the mothers and fathers of the Abrahamic faiths - Abraham, Sarah, Isaac, Rebecca and more. This truly was like standing on holy ground. However, not to be lost in all of this is the fact that all of this is located in Hebron, a city with a rich and often tragic history and an incredibly difficult present. This is a wildly divided city with dividing walls, military occupation and empty streets. In the midst of this city sits all of this history centered around the call and blessing of God through Abraham to ALL PEOPLE of ALL THE EARTH. This paradox is nearly impossible to hold and is a call to thought, prayer and action. 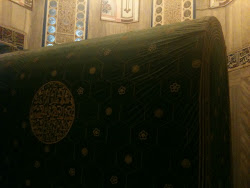 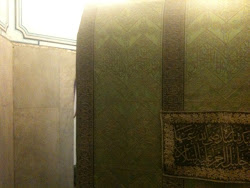 We then met with Walid Abu-Alhalaweh, the Public Relations Director of the Hebron Rehabilitation Committee. This was another story of faith and hope that must be told. This organization is based in one of the most divided and often violent places along the West Bank. They stand there to rehabilitate homes that are 400-800 years old. They do so to make a statement. They want to make it possible for the former inhabitants of these homes, Hebron Muslims and Hebron Jews, to return to their neighborhoods and make them thrive again. More than that, they exist to rehabilitate the minds, hearts and hope of the residents of Hebron. It is true that Hebron is a sad story, but there is hope! I was overwhelmed by the organization's optimism and faith in a circumstance that must often seem dire and hopeless. Check out more about this organization at www.hebronrc.org. 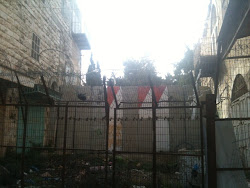 We ate lunch in a 400 year old home of a resident of Hebron. We had a traditional Palestinian meal called ma'loubeh, which means "upside down" in Arabic. This is a meal of rice, cauliflower and chicken made in a single pot with the chicken, or other meat, on the bottom of the pot. When it is served, the pot is turned upside down. It was delicious.
Our day was topped off with a visit to a wonderful glass factory and the Franciscan Chapel of the Shepherd's Field. 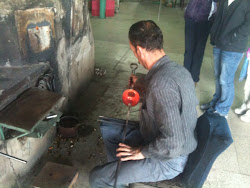 What an amazing couple of days! I cannot wait for what the final two days has in store.
Until next post...
Shalom from Bethlehem
Prose Thoughts Travel