Walking Together and Building Bridges

By Brian Shivers - February 08, 2012
Recently, I had the opportunity to travel throughout Israel and Palestine with a really good friend.  It was my first time there, and it was overwhelming. This trip had been a dream of mine for an incredibly long time. In fact, my father, grandfather and I had dreamt for years that we would take this journey together. They are two giants in my life. They are my mentors, my teachers, and people who continually called me into deeper water. They both entered the real presence of God several years ago.  Therefore, I went on this trip carrying them with me in my heart and my mind. Their teachings and example have played a huge role in bringing me to this moment in my life. Their presence and memory impacted the way in which I experienced much of what we call the Holy Land.
Many of the experiences in Israel and Palestine were transformative.  However, one moment in particular continues to haunt me three weeks after my return. 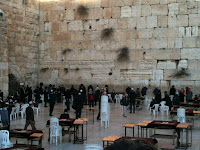 One late afternoon, as my friend Tave, an additional traveling companion, and I departed the Western Wall and Temple Mount, we witnessed something that could only happen in Jerusalem, and it stopped us in our tracks.
Jewish families were heading toward the wall to pray in one of their most sacred locations as the setting sun marked the beginning of their Sabbath.
Simultaneously, the Call to Prayer was sounding all across the third most holy Muslim city in the world beckoning all Muslims to prepare for their evening prayers.
Above our heads hung twinkling Christmas lights reminding the Orthodox Christian pilgrims, who had begun to fill the streets, that Friday, January 6 was the eve of the birth of the Christ Child.
All the while, the marketplace continued to buzz with foot traffic and shop owners pleading the people to come into their stores for one last purchase to close the day. 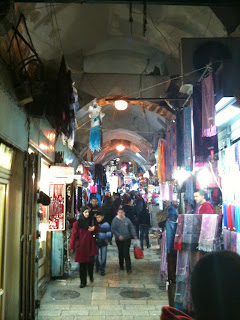 There was something absolutely beautiful about this scene.
The people of the three dominant Abrahamic faiths have converged there.
The people of the book, the people of these three faiths, call this city of Jerusalem, this "city of peace", holy.
The people of these three historic and often misinterpreted faiths live life there in the midst of one another.
Yet somehow,
tragically,
the beauty of this moment has gotten lost in a political and inter-religious maelstrom that leaves nothing but destruction, uncertainty, and misunderstanding in its wake.
There must be a way through this labyrinthian via dolorosa, this tangled way of sorrow.
It will not be easy or convenient.
The way may be complicated and confusing.
But the walk will indeed be worth it, and it is happening every day in Jerusalem among the everyday people of faith.
Let us walk this way together building bridges of hope and reconciliation.
As Christians, we are commissioned to do so...
For we are what (God) has made us, created in Christ Jesus for good works, which God prepared beforehand to be our way of life. So then, remember that at one time you Gentiles by birth, called "the uncircumcision" by those who are called "the circumcision"—a physical circumcision made in the flesh by human hands—remember that you were at that time without Christ, being aliens from the commonwealth of Israel, and strangers to the covenants of promise, having no hope and without God in the world. But now in Christ Jesus you who once were far off have been brought near by the blood of Christ. For he is our peace; in his flesh he has made both groups into one and has broken down the dividing wall, that is, the hostility between us. (Ephesians 2:10-14)
For the love of Christ urges us on, because we are convinced that one has died for all; therefore all have died. And he died for all, so that those who live might live no longer for themselves, but for him who died and was raised for them. From now on, therefore, we regard no one from a human point of view; even though we once knew Christ from a human point of view, we know him no longer in that way. So if anyone is in Christ, there is a new creation: everything old has passed away; see, everything has become new! All this is from God, who reconciled us to himself through Christ, and has given us the ministry of reconciliation; that is, in Christ God was reconciling the world to himself, not counting their trespasses against them, and entrusting the message of reconciliation to us. So we are ambassadors for Christ, since God is making his appeal through us; we entreat you on behalf of Christ, be reconciled to God. For our sake he made him to be sin who knew no sin, so that in him we might become the righteousness of God. (2 Corinthians 5:14-21)
Shalom, salaam, peace be with you...
culture Second Testament stories