I had the distinct privilege of traveling to many amazing places with some incredible people in June and July. The way in which they experienced the world around them and the manner in which they embraced their experiences challenged and changed me. 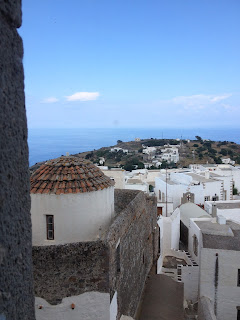 One experience that will forever be a part of my memory, my life, and my faith took place with a group of recent high school graduates on the beautiful island of Patmos.  Patmos, a small Greek island in the lapis blue Aegean Sea, is one of the most picturesque places one can ever visit.  It is quiet, quaint, and shrouded in mystery.  Tradition holds that it was to this island that the Apostle John was exiled during the persecutions and reign of Domitian in 95 AD. Because of the number of pilgrims who journey to the island every year it is often called the Jerusalem of the Aegean.

Half way up the mountain which leads to the monastery that bears the name of St. John lies the Grotto of Revelation.  The Eastern Orthodox Church has long held that it was in this tiny cave that John received the vision that became the Book of Revelation.  This small grotto has been transformed into a simple yet elegant chapel.  In the chapel you can see the niche where tradition holds John laid his head when he rested, a smaller niche where he placed his hand to help him stand up, and a flat space where he and his scribe (Procorus) wrote the text of Revelation.  Perhaps the most mysterious characteristic of the grotto is the ceiling which is divided into three distinct sections.  The legend says that the ceiling was divided into thirds when the Risen Lord first spoke to John, and his voice was so loud and his words so important that the cave shook violently creating the fissure. The church and pilgrims alike have understood these three sections to represent the Christian doctrine of the Trinity - Father, Son, and Holy Spirit.

As we entered the grotto on a beautiful cloudless June day one student and I found ourselves at the front of our group. We walked quietly toward the front of the grotto which doubles as the iconostasis (a wall of beautiful icons that separates the nave from the sanctuary) to have a seat.  Our eyes were drawn to a small
woman dressed entirely in black standing with her companion near what at one time was the opening of the 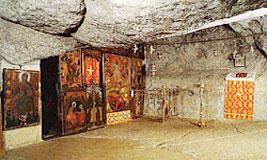 cave.  This elderly woman, back severely bent by her years, hands gnarled by the passage of time, was facing the only window in the grotto.  Then her companion reached out and gently took the woman's left hand and stretched it toward the ceiling.  With every ounce of energy her frame could muster she allowed her friend to place the back of her hand on the ceiling gently tracing its form.  The woman's hand slowly caressed each section of the Trinitarian divide as if she were touching the very face of God.

Our eyes remained transfixed on this scene as she returned to her natural bent posture.  She and her attendant linked arms and turned to enter the main section of the cave.  As they turned tears streamed down her cheeks bearing witness to the holiness of the moment she had shared in the presence of her God.  And tears fell from our eyes as we bore witness to this beautiful act of devotion, worship and sacrifice.  There was no doubt in our minds that ground upon which we placed our feet was indeed holy ground.

I cannot tell you what happened in the grotto following this encounter, but one thing is for sure, our lives were forever changed in that one holy moment. 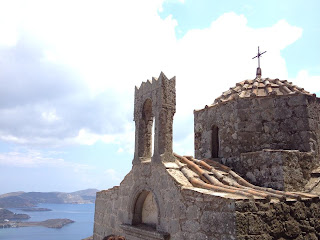