By Brian Shivers - September 15, 2013
The comparison game that many of us play is a truly dangerous game. We risk the loss of our sense of self when we spend our time and energy looking at the other and comparing ourselves to them and their abilities, what they have or don't have, and the myth of who we perceive them to be or who others think they may be. Because of our insecurities we gaze into the lives of other people and attempt to live into someone else's imagined version of reality. This imagined version of reality is exactly that - imagined. It exists for no one. Genuine self is sacrificed on the altar of this vain chase of that which will always exist beyond our reach. Our comparison game is futile and has potentially deadly consequences as it drives us to try to be someone we were never meant to be and somehow feel inadequate or lesser than because of our failure to achieve it.
Grace calls in a different direction. The beautiful and frightening nature of grace is that God sees us exactly as we are, and accepts us - no pretense. It is difficult to stand in the bright light of such grace. We are frightened because such a grace allows no room for the comparison game. It demands the genuine self. There is nothing we can do to earn that kind of acceptance. There is nothing we can do to be disowned. As we move into that which the late Brennan Manning called the "accepted tenderness" of God we are truly transformed, and perhaps for the first time able to accept and live into the person we were created to be.
This weekend, I was privileged to witness the miraculous power of acceptance and honesty. Nearly 2000 walkers walked in the Out of the Darkness Walk in Indianapolis (sponsored by the American Foundation for Suicide Prevention). As people from across Indiana gathered, hugged, cried, laughed, and stood up to shatter the silence of suicide and depression, I realized that the power of this day was found in the fact that there was no play-acting on that field. Everyone was there in the full beauty of their personal brokenness and pain boldly staring into the eyes of the beast and screaming, "No more!" I was brought to tears by this picture of humanity moving together with purpose encouraging the best of self to emerge with courage from every life. This is what hope looks like.
May we fall headlong into the "accepted tenderness" of God as we refuse to get lost in the comparison game. 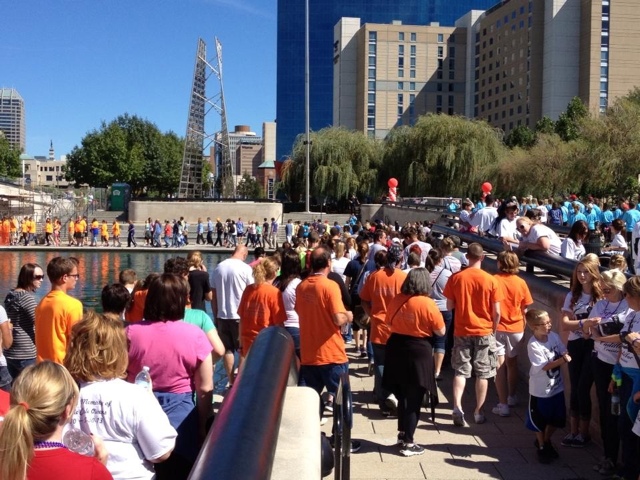