On the Anniversary of Bloody Sunday in Selma, AL

By Brian Shivers - March 07, 2016
Last year on this day, I was on a bus heading for Selma, AL to commemorate the fiftieth anniversary 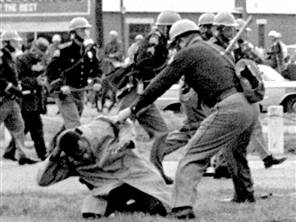 of the first march from Selma to Montgomery to demonstrate for voter's rights for African-Americans. Over 50 years ago, when that first group of demonstrators got to the Edmund Pettus bridge (a bridge named after a Confederate brigadier general, a US Senator, and Grand Dragon of the Alabama Ku Klux Klan) they were met by local law men and an angry posse who greeted their peaceful march with the violence of swinging billy clubs, tear gas, fists, and feet. The moment was captured on camera and was broadcast across the country. The day became known as Bloody Sunday.

As our bus got closer to Selma, the traffic slowed to a crawl. Several of us decided that we would disembark and walk the remaining two miles into Selma. It was a surreal and emotional experience. As we walked I began to imagine what those original marchers must have felt when they set out on foot to the state capital where they would make their presence known and would make their case for voting rights for all. I thought about the faces of the men and women who took that first important step not knowing what they would face as they stood for what is right. I thought of Representative John Lewis who was one of the original marchers and who suffered a cracked skull at the end of one of the police officer's billy clubs on that fateful Sunday. I thought about us. I thought about where we are today...50 years later. And I teared up as I thought about how far we have come in that time but also about how far we have yet to go.

When we finally arrived at the foot of the Edmund Pettus bridge, we had the opportunity to hear Representative Lewis speak of his time as a leader of this movement for change. We heard him recount what it was like to lead a group of 600 marchers walking two-by-two on the sidewalk of the bridge so as to not disrupt traffic and trade. We heard him share about his friends and fellow foot-soldiers who gave of their youth to change the world in which they lived. And then...and then, he said these words that will be forever ingrained in my being,

We were so peaceful, so quiet, no one saying a word. We were beaten, tear-gassed.
Some of us were left bloody right here on this bridge. Seventeen of us were hospitalized
that day. But we never became bitter or hostile. We kept believing that the truth we
stood for would have the final say. This city, on the banks of the Alabama River, gave
birth to a movement that changed this nation forever. Our country will never, ever be the
same because of what happened on this bridge.

It is a great honor for me to return to my home state of Alabama, to present to you—
not to introduce to you, but to present to you—the president of the United States. If
someone had told me, when we were crossing this bridge, that one day I would be back
here introducing the first African-American president, I would have said, 'You’re crazy.
You’re out of your mind. You don’t know what you’re talking about.' President Barack
Obama!

The crowd of thousands roared in appreciation and in recognition of the life of service of Representative Lewis. As President Obama took to the podium, he and John embraced, and the president joined in the applause for John. As the applause died down, President Obama opened his remarks with these words,

As John noted, there are places and moments in America where this nation’s destiny
has been decided.  Many are sites of war -- Concord and Lexington, Appomattox,
Gettysburg.  Others are sites that symbolize the daring of America’s character --
Independence Hall and Seneca Falls, Kitty Hawk and Cape Canaveral.

Selma is such a place.  In one afternoon 50 years ago, so much of our turbulent history
-- the stain of slavery and anguish of civil war; the yoke of segregation and tyranny
of Jim Crow; the death of four little girls in Birmingham; and the dream of a Baptist
preacher -- all that history met on this bridge.

It was not a clash of armies, but a clash of wills; a contest to determine the true meaning
of America.  And because of men and women like John Lewis, Joseph Lowery, Hosea
Williams, Amelia Boynton, Diane Nash, Ralph Abernathy, C.T. Vivian, Andrew Young,
Fred Shuttlesworth, Dr. Martin Luther King, Jr., and so many others, the idea of a just
America and a fair America, an inclusive America, and a generous America -- that idea
ultimately triumphed."

On this 51st anniversary of that day, I think about the words of Rep. Lewis and President Obama and wonder if that idea has "ultimately triumphed". I hear the news of hate speech being spray painted on the walls of a mosque in Plainfield, IN, and I wonder. I see video footage of a young African American girl being pushed, shoved, spat upon, and yelled at as she is being "escorted" out of a political rally in Kentucky, and I wonder. I watch news stories about another case of bullying that ends in a suicide of yet another young person who is made to feel less than because of their orientation, and I wonder. I read the vitriol of our political candidates and can't help but feel the echoes of hate in their words as they vilify those they can't understand, and I wonder. Has the "the idea of a just America and a fair America, an inclusive America, and a generous America" ultimately triumphed?

Over 50 years have passed, and yet we stand here in this important moment in our history together as if Bloody Sunday were just yesterday. We have a long way to go. And we must go there together. If this experiment that we call the United States is going to continue to grow, we must go there together. Only in our common resolve, only in our devotion to one another, only in our commitment to "life, liberty, and the pursuit of happiness" can this place we call home be all we hope it can be. We certainly disagree on how this can best be accomplished. We have differing ideas as to how we can get there. But we must, in spite of our differences, dedicate ourselves to moving forward together. It is time for another group of courageous people to stand together for what is right for all. It is time for you and I to take that first step together even in our differences, or perhaps because we have the freedom to allow our differences to exist. On the anniversary of Bloody Sunday, it is time. As Dr. Martin Luther King, Jr. once said, "We must learn to live together as brothers or perish together as fools."
campus ministries High School Ministries Middle School Ministries Parents stories