By Brian Shivers - May 29, 2017
Every Sunday in Marion, Indiana, my family attended a small Assembly of God church directly across East 29th Street from my maternal grandparents' home. Following church, we would walk across the street to join my grandparents for lunch in their quaint two bedroom home my grandfather built with his own hands when my mother was five years old. This house was a second home of sorts not only for me and my immediate family but also for all of my great aunts, great uncles, their children, and their children's children. There was always great home cooked meal to eat, room to sit on the davenport (couch to those of you who don't know), tea and lemonade, and plenty of love and acceptance to go around. This was a home that reminded you that you were deeply connected to something much bigger than yourself and that you mattered. The richly paneled walls spoke the beautiful and sometimes painful stories of family. The rooms sang the songs of love and devotion. The faces in the family portraits of people and a time long since passed reminded us all of who and what was of ultimate importance. Some of the young men in these portraits wore military dress uniforms and could not appear more dignified. Even though all but one of them returned from their service, they all were different men because of what they saw and experienced while wearing their combat uniforms. While they seldom spoke of their experiences, the battles they fought and the call of duty they answered shaped me. I am thankful for these men and the families that supported them. They not only served their country but also helped form me into the man I am today.
I grew up in Brookhaven. Brookhaven was and still is a quiet neighborhood just outside of the Marion city limits off of 38th Street. My Uncle Orval had a hand in building a number of the homes in the neighborhood, including his own. Approximately a mile by road from the front door of my house or a stone's throw across the Mississinewa River was the VA Hospital and the Marion National Cemetery. The facility opened in 1889; the cemetery a year later. In the carefree days of summer, while in the backyard or at a neighbor's house, play was often accompanied by the sound of taps being played and twenty one shots ringing out at a service person's funeral. Our parents made sure that the meaning of the sounds from the lonely bugle player's instrument across the river was never lost on the children of the neighborhood. This was the sound of yet another woman or man who had valiantly served our country being laid to rest. Taps and twenty one guns were the final sounds honoring the dead. My life was indelibly marked by these haunting sounds. 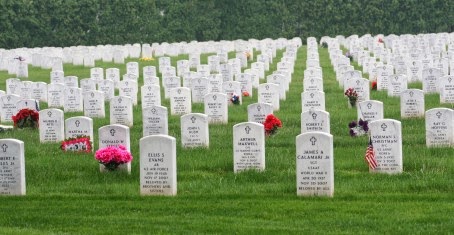 On the way from my house into Marion on 38th Street our car would drive past the main entrance of the Veteran's Hospital. At the main gate there was a sign to welcome all guests into the facility. For years this sign had a poignant reminder scrolled across the bottom. The sign read, "The Price of Freedom Is Evident Here." I thought I understood what this message meant until I had the opportunity to serve one summer as a chaplain's assistant in the hospital. I visited with men and women who had served in World War II, Vietnam, Korea, and the years in between. They had voluntarily put their lives on hold, left their families behind, and paid an incredible price in service of their country. It was that summer that I met Penny. Penny was a small, fiery, and mighty redheaded man who had served in World War II. He was crass, abrupt, and hysterical. He worked as a maintenance man during the morning hours and played a mad game of pool in the afternoon at the day center. I can still hear him chirp at me, "Anyone can hit the ball hard. Show some finesse young man." I grew to love Penny as I spent several afternoons listening to him and his fellow service men and women tell stories about their lives, their loves, and their losses. As the summer grew longer, Penny grew weaker. I visited him in his hospital room and then in the nursing home. One Monday morning as I checked in at the chaplain's office I was told that Penny had died earlier in the weekend. The taps that would soon be played would be played for him. The price of freedom, the joy in service, and the valor in battle were evident in the life of Penny. My life was forever changed because of him.
As this Memorial Day comes to a close may we never forget that each person who serves has a story, a history, and a family. Let us pay them our respects.