When the history is inconvenient, painful, and difficult to name and acknowledge lean in, listen close, and sit with it for a while. There is so much to learn.

Over the last week, my family and I had the opportunity to visit some beautiful outdoor locations in and around Virginia Beach, Virginia. For our Covid vacation, we stayed outside - no indoor eating, no museums, no aquariums, no historic building tours. And frankly, it was amazing. The scenery, the ocean, the flowers, the wildlife all took our breath away numerous times. It was wonderful to bask in their beauty. However, there were also a number of moments at historic sites along the way that gave us pause. Jennifer, Allison, and I have done some verbal processing together and sat in silence as we thought about what we experienced. Personally, I will continue to sit with what I learned and try my hardest to take the necessary time to process it all. But I confess that there has been and continues to be a heaviness in my spirit after these encounters with history.

On our visit to a beautiful state park where we walked in haunting swamps, found a snake, a skink, turtles, and a peaceful beach, the name of the park struck me in a powerful way - First Landing State Park. Seems pretty innocuous. That is until you think about what it means and take a look at the historic marker (pictured below) that reads, “After nearly five months at sea, 104 Englishmen landed here at dawn on April 26, 1607. To honor their prince, they named the site Cape Henry and planted a wooden cross.” Ah, there it is, the “First Landing.” That arrival is something to celebrate, right?! Read on. “The settlers faced severe challenges. The local Paspahegh Indians resisted the intrusion into their homeland.” Out of the entire sign, the Paspahegh people who occupied the land got one line. And the only reason Paspahegh got that line is because of the "challenge" they posed to the "settlers". Let that sink in for a moment. The people who originally named this place, the ones who called it home, the people who landed there long before those Englishmen, the people who raised their children there, the people who farmed the land, the people who would eventually be eliminated as a people by 1611 - four short years after the “intrusion” - got a single line and are mostly forgotten to history. And this very thing is repeated over and over again throughout the United States. Most states have similar historic markers that say similar things or don't have much to say about the peoples who lived on the land before it was ceremoniously taken from them while they were forcibly removed or eliminated. This “intrusion” and all of those like it were invasions. This “discovery” was a conquest. There is nothing to be done to change this history. But we must face it and learn from it. We must name the people who once called these lands home. We cannot allow them to be forgotten. We cannot allow them to be relegated to single lines on placards and historic markers. Many of them still live on this land. They are not just history. We must learn. We must commit ourselves to doing better. We must be better.

On another beautiful day, we had the opportunity to visit Fort Monroe in Hampton, VA. This is one of the oldest star shaped forts in the United States. It is surrounded by a moat. Named for President James Monroe, portions of its construction were overseen by then Lieutenant Robert E. Lee (yes, that Robert E. Lee). President Abraham Lincoln stayed in the fort during portions of the Civil War. It was quite the site to see and even includes one of the oldest still active lighthouses just outside its walls. I encourage you to Google it if you are interested in learning more about its deep history.

Before Fort Monroe was constructed on this land, the area was known as Point Comfort. On August 20, 1619, twenty or more enslaved Angolans who were captured from a Portuguese slave trading ship that was bound for the Caribbean were brought to Point Comfort aboard the White Lion. These twenty plus African men and women, who were the first enslaved Africans recorded to have been brought to North America, were traded for food and provisions thus beginning 246 years of slavery in North America. 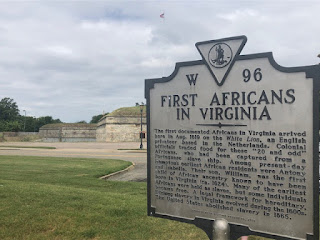 Only a history marker stands on the shore in front the giant fort marking the spot where history says these women and men were forced into slavery. Hundreds if not thousands of people run, walk, drive, and sail past this spot everyday. It isn't that I think they should stop and read it every time they pass. It's just that I long for a time when we not only acknowledge the places where these horrific historic events took place, but that we consciously consider what they say about our collective past and how the United States was built (both figuratively and literally) on the lives of enslaved peoples.

Finally, while walking the grounds of Fort Monroe, I came across the two markers below. 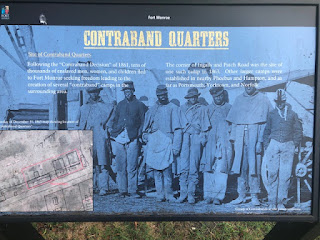 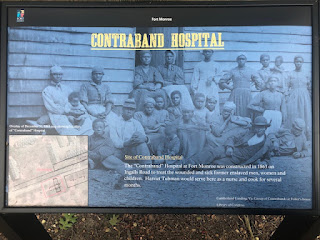 Fort Monroe became known as "Freedom Fortress" during the Civil War following the "Contraband Decision" or "Fort Monroe Doctrine" of 1861. This doctrine stated that any escaping enslaved person who reached Union lines would be considered "contraband of war" and would not be returned to slavery. Thousands of enslaved people made the perilous journey to the fort where they would gain their freedom. This led to the construction of "Contraband Quarters" within the fort and just beyond its borders. A hospital was also constructed to care for the wounded and sick formerly enslaved women, men, and children who arrived at the fort. Harriett Tubman served as a nurse and a cook at the "Contraband Hospital" in 1865. She left because of the low standard of care these people were receiving from the doctors at the fort.

Each of these faces on these placards is a person with a story, a family, a past full of the horrors of slavery, and a courage that has seldom been matched. And these people who made it to this fort are only a small portion of those who made the harrowing journey and a tiny sample of the millions who never had the chance to taste freedom. These people, these men, women, and children who were stolen from their homeland, were enslaved or born into slavery, were now considered "contraband of war". Even though they were free from the horrors of slavery, they still were not considered fully human. They were still treated inhumanely.

The genocide of the indigenous peoples who called this land home and the abduction and enslavement of people from across Africa are an important part of the history of the United States. They must be confronted for the truths they continue to tell. They must be confessed for the horrors they wrought and continue to levy on indigenous peoples and those of African descent. They must be named for the ways in which they inform who the United States was and who the United States is. There is no way around this inconvenient history. Ignoring it, excusing it, dismissing it, or wishing it away allows the dehumanizing and murderous ideologies that led to such atrocities to continue to exist unchecked. It is up to me, it is up to us, to face the difficult things, to name the ugly chapters of the story, to confront the painful history, to demand an accounting, to work for a better world.

When the history is inconvenient, painful, and difficult to name and acknowledge lean in, listen close, and sit with it for a while. There is so much to learn.